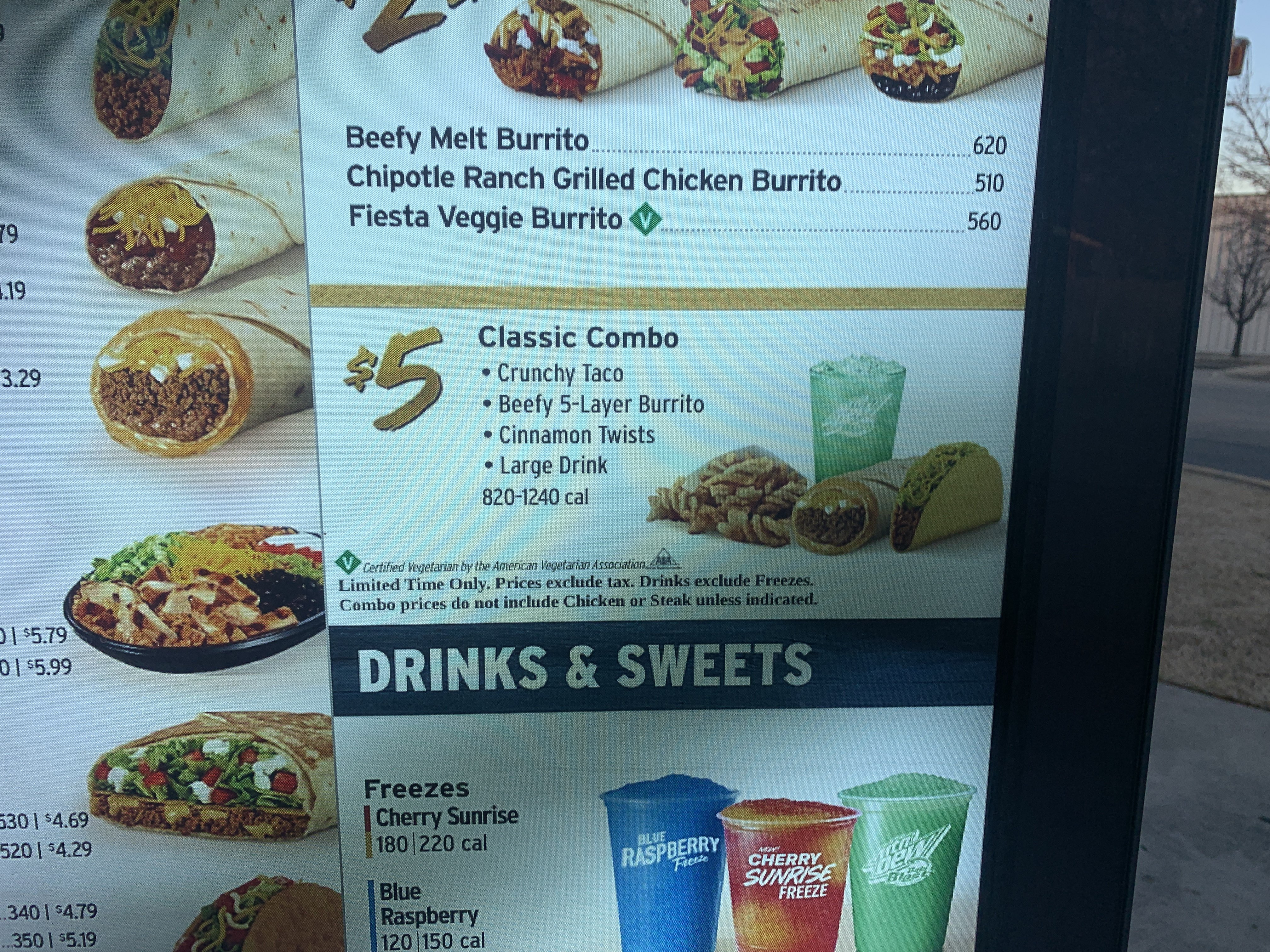 Apparently the MANAGER at the CITY OF ADA location of TACO BELL has a problem reading his own menu. He claimed before my diabetic type II client that the CITY OF ADA TACO BELL did not have a five-dollar box meal, after charging $11.90 for a Nacho Bell Grande plate, and REFUSED TO ACCEPT THE FALSE ORDER BACK by lying to the customer before my witness.

I've worked fast food. I don't mind the order being wrong. What was offensive was that the MANAGER came to the window and lied to me in clear witness of a DISABLED PERSON with a diabetic need for a meal, rather than perform a refund or offer the basic food the DISABLED CLIENT was seeking in their original order - which they had already paid for and received the wrong food. 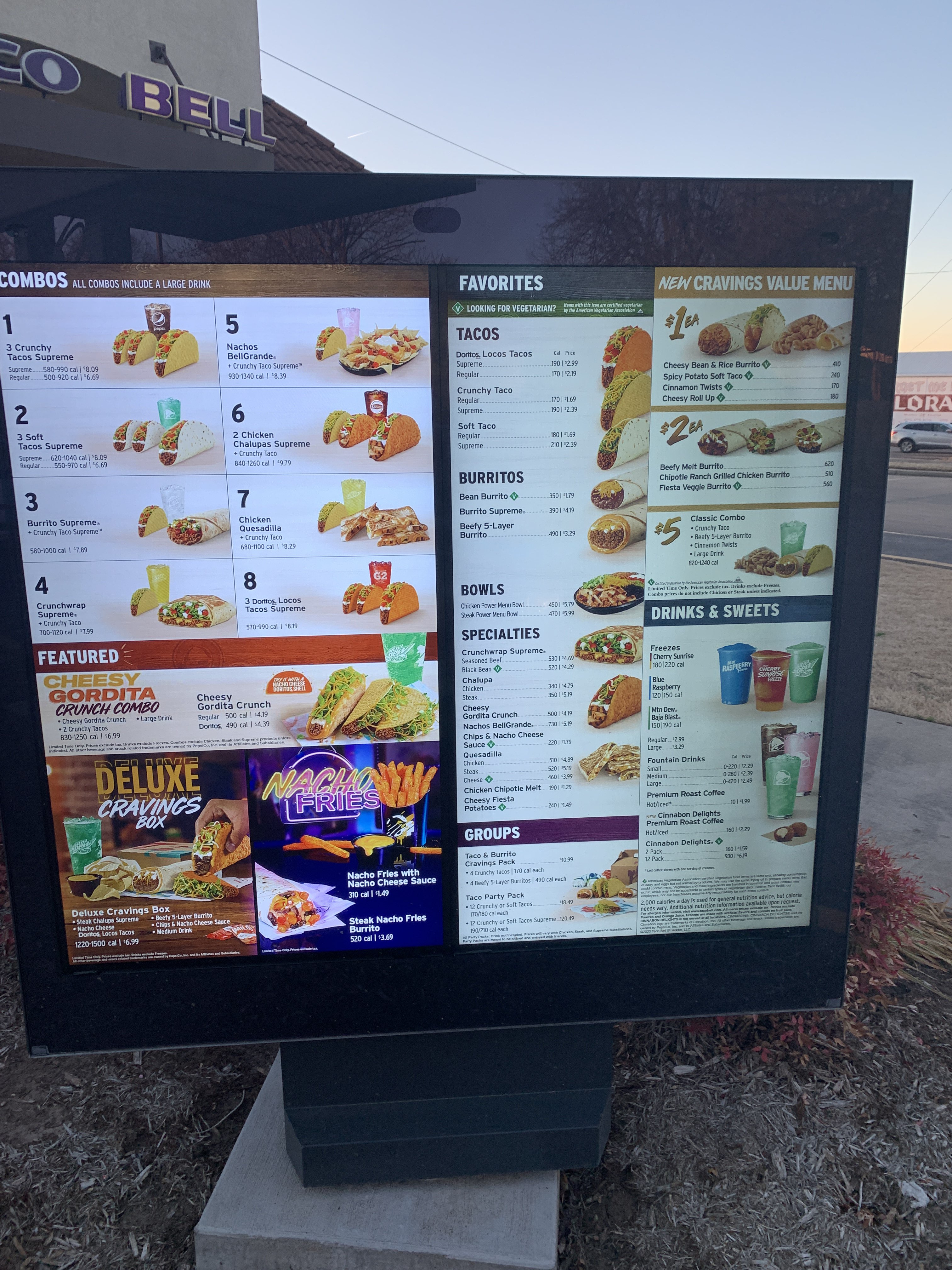 If the item were out of stock, a burrito, I would have also accepted that. But the MANAGER stated that they do not even have a $5 item on the menu. What's worse, is that he elaborated on this point naming two other items of higher value than the NACHO plate (which was stale when later inspected) and declined to refund or just add a burrito for the DISABLED CLIENT who ordered two large drinks expecting them to be part of the COMBO for under $10.

The cashier had already admitted that she had entered a #5 combo rather than a $5 box, a simple mistake, but this behavior by a MANAGER to blow off the issue by calling the customer a liar did not leave a good impression. The DISABLED client was afraid to fight the dispute because he was afraid the employees would spit in his food if he resisted any further.

I cannot blame him, given the attitude of the MANAGER, and took the time to document the menue so we can discuss this trend of fraud by business owners in City of Ada in discrimination against clients with disabilities.

The $3.39 fraud may not seem like much on the receipt, but the MANAGER behavior to force a customer to pay for $11.90 meal they cannot eat at store # 004462 does make me feel like I cannot trust them to make my food.

Being accused of lying by a MANAGER of store 004462 of Taco Bell IP Holder, LLC and SMG customer relations services, as stated in our conclusion of this incident. Photos were taken to document false claims by the manager on duty, to the false advertising and product substitution entitled possible civil action.

After my mother died this month, I was just trying to take a moment with a friend and relax. I shouldn't have to deal with this in addition to a $16,000,000 USD civil suit against VERONCIA PETERSEN (suit wrongly brought by PONTOTOC COUNTY, violating UIFSA Section 314 immunity at such time) for malicious prosecution in violation of rule 314 immunity filed in Nov 2018 to disrupt case 15-06292-393 in DENTON COUNTY exceeding $108,000 USD in fraud then in court in March 2015-2020 and obligated being enjoined per rule 306 from 2018-2020.

My express refusal to allow my limited liability company to participate in her adult content business and objection to her false claim of employment in her activity first revealed by Scott Goodridge, who died in 2005 after a similar attempt on my life in 2003 and assault at gunpoint in 2002; leaves my cynical of such behavior by any Ada business.

As theft of mail confirmed by the U.S. Postal Inspector in January 2022 and prior 5 vehicle strikes on our mail box preceding extortion letters in 2021 November 14 and telephone calls to extort November 7th 2021 on contact with Alicia Scarbrough and other associates in this fraud in person in the county remind me, this conduct is not acceptable of any professional community or City. After two break-ins in 2012 following threats of a similar nature and 300 pages of threats in 2013, and May 20 2020 attempted break-in at my office, witnessed also by my client in the incident today - who suffered $300,000 in Medical injury in 2017 recovering my vehicle from theft with intent to take the vehicle out of state; I find the conduct unsettling.

It is enough to suggest removing our business, which has operated in the City of Ada from 1990-2022, may be necessary to escape the public incitement of violence and fraud in the community and against our property and personnel, denied law enforcement action over such express demands for $41,000 USD in violation of Federal Law now under formal complaint; concealment of a child, and threats resulting in the death of Dr. Ann Klepper M.D., a pediatrician and grandmother of the missing and exploited child.

I am not, and never have been "the technical guru among us", for PORN KING or any such operation; and the claim contrary clear separation of business was alarming enough that the party cc'd me the prior chat to show how my name was being misused then. I later heard claims that I was married to EmerldGirl, and discovered when she was barred from our office that she had attempted to place her name on business documents. The Sheriff of Pontotoc County served a warrant on our office seeking her, disclosing her claims of being a victim of check fraud were in fact false - and she was the party held liable for the check fraud alleged in her story by the court. This pattern of fraud has been repeated since Ada High School, when her brother was the victim of such abuse and 'gaslighting'; then later a Norman High School resident whose mother was dying of cancer; and after 2001 the focus shifted to me. This confidence game to instill retaliation among others in the Theater and Arts community and religious community of City of Ada have made living in Ada almost unbearable from 1999-2022.

Efforts to dilute my legal registered brand and name, then stryx@chickasaw.com - have been central to the fraud and effort to damage the limited liability company, including claims of ownership or equity which are wholly false, and carried through THECHURCHBOARD.COM and VAMPIREFREAKS.COM in various threats to conceal a child for abuse and parental alienation after abduction from his home in 2001 in an act of extortion without legal cause and in 5th and 6th Amendment violations evident on $1600 private investigation of case records in February 2022 filed in $16,000,000 USD civil suit sustained without respect to immunity and to obstruct recovery of the child and all contact from 2001-2022 in a premeditated child snatching violating KELLY v KELLY (2007) Oklahoma Supreme Court rule and PONTOTOC COUNTY DISTRICT COURT rule 5.3.

Repeated incidents with the ADA CITY POLICE in 2021 November, including refusal of 21 O.S. 21-1305 and 22 O.S. 22-13 rule, require we disclose the prior contract and records to show refusal to issue a subpoena duces tecum against the creator of new hate site installing this fraud, are met accordingly. Threatened injury to the child, now an adult as of 2019 June, to suppress this evidence, expose why the STATE OF TEXAS refusal to hear this case or allow witnesses coupled with ICANN and ARIN and RIPE NCC promotion of this fraud globally are a $1 billion credit fraud affecting specificl sales of $423 million and $67 billion USD in 2018 and 2022 during the course of the fraud.

Where the victim of such fraud is within PONTOTOC COUNTY, the jurisdiction should be here for such subpoena to be issued. Once issued, service to ONTARIO CANADA based GOOGLE LLC to obtain the information for civil suit on November 14 2021 threats to extort and seek "adjudication" and "forfeiture" of property in PONTOTOC COUNTY in violation of 21 O.S. §21-1533 should be clear felony activity barred in civil debt collection per 15 U.S.C. §1692d and a duty of the State and County District Attorney to act on per 15 U.S.C. §1692n and 21 O.S. §21-1305 rule.

As we received over 40 communications in November 2021 in this conduct, inciting the public to act against our family and person; preceding the death of Dr. Ann Klepper in March 2022; and such abuse injuring her in 2007-2022; I feel this conduct is unacceptable and a symptom of the failure to prosecute the parties responsible for such fraud in our community against businesses and persons, including grand theft auto (2017), which have resulted in major costs to the STATE OF OKLAHOMA and UNITED STATES incorporated in a Title IV Agency fraud barred by 45 CFR 303.11(b)(17) rule from enforcement. The State has tried to try this case six times, barring defense witnesses and conducting itself in a criminal fraud based on false case number creation, reversal of Petitioner and Respondent in a Civil Suit, and destruction of DOCKET HEARING records in 2001 to conceal a trial disclosed by Dec 14 2001 order; to create a second trial in 2002 violationg Federal and State Law after threats to burn the defendant's home and destruction of that residence by fire in concert with witness intimidation sustained in 2003, 2004, 2007, 2009, 2010, 2011, 2013, 2015, 2016, 2017, 2018, 2019, and 2021.

Today's incident remidns me that it is dangerous to go anywhere in Ada alone, under such criminal atmosphere as this group is promoting and is permitted in our community. Persons deceived by this fraud (76 O.S. §76-3) may act inappropriately, and while juvenile, the injury to real person is very real and part of a scheme or plan to defraud (18 U.S.C. §1341) incorporating Social Security Benefits Theft (18 U.S.C. §666) and false statements to Federal Records including false convictions (18 U.S.C. §2071) to cause massive spoliation to the case (23 O.S. §23-9.1 subsection D class III violations). In addition to 76 O.S. § 76-1, 76-6, and 76-8 violations alleged for $8 million USD in additional damages. Not getting a burrito may not seem very important, but when you are TYPE II DIABETIC and someone takes your money and refuses to give you the food you ordered, it is somewhat more than inconvenient.